Lib Dem parliamentary candidate Max Wilkinson is celebrating a major victory in the fight against air pollution outside schools – with the introduction of Gloucestershire’s first School Streets initiative at a Cheltenham school. 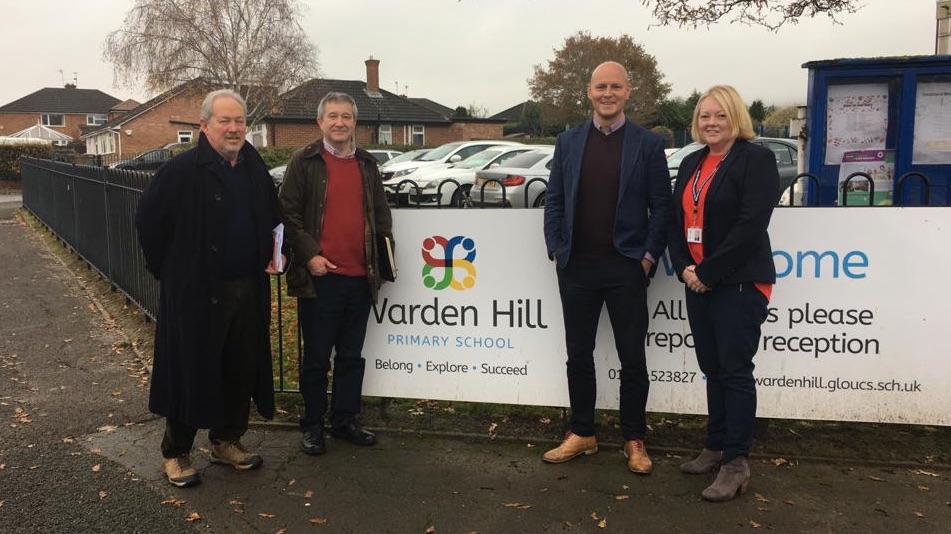 It will mean that Durham Close, the road outside the school, will be closed to all vehicles during drop-off and pick-up times in order to reduce children’s exposure to pollutants.

There will be exceptions for Durham Close residents and parents of disabled children.

Officers from the county council gave the green light to the scheme during a meeting with Max and Iain Dobie, a Cheltenham Borough councillor for Warden Hill, who led the campaign.

Max, who also serves as a councillor for Oakley ward, said: “This is such good news for the children of Warden Hill Primary School. The introduction of this scheme will improve their health no end.

“Congestion from cars at the school gates during drop-off and pick-up times leave a raft of toxic fumes which affect everyone in the vicinity.

“Children are particularly vulnerable to the impacts of air pollution, which is linked to chest problems in later life that are irreversible in some instances.

“This scheme will encourage more pupils to cycle and walk to school – ensuring they get much-needed daily exercise.

“Today’s brilliant news is the result of a long campaign from the Cheltenham Liberal Democrats, headed by Cllr Dobie, to lead the way in bringing the School Streets initiative to Gloucestershire.

"It also reaffirms the Liberal Democrats' commitment to tackling the climate emergency on the day we are announcing a £100billion package nationally to address the crisis."

School Streets schemes, which close the roads outside schools during drop-off and pick-up times, have been introduced at various schools across the UK but Warden Hill Primary is the first school in Gloucestershire to adopt the initiative.

The initiative has gathered pace in light of research pointing to the damaging effect of air pollution on children at the school gates.

Research by Unicef has revealed that during the school run and while at school children are exposed to disproportionately high rates of air pollution, while studies led by King’s College found that exposure to air pollution at schools was damaging lung development in children.

At the same time, childhood obesity in Gloucestershire is an increasing problem.

Cllr Dobie, who is also a county councillor for Warden Hill and Leckhampton, consulted local residents about the scheme and received 100% support from the 60% of residents who responded to the consultation.

He said: “This is pioneering and it has set a precedent in Gloucestershire. I’m now expecting the dam to burst and schools up and down the county to adopt the initiative.

“It will help to change the public’s perception of the school run when it comes to air pollution and the health of children.

“The benefits of School Streets go beyond just cleaner air and exercise. The initiative also transforms hectic and congested school roads into safe and pleasant environments during drop-off and pick-up times.”